skip to main | skip to sidebar

I usually have a piece of chocolate with my cigar, but in this case, it would be redundant, as the cigar is plenty sweet and chocolatey all on its own.

The write-ups promise such things as:

"savory espresso notes and a touch of milk chocolate, all perfectly balanced by a sweet, velvety aftertaste."

And make note of:

"three times the ligero typically used to produce a cigar this size."

A guarantee of the full punch that goes long with that much ligero is more than implied.

Those assurances seemed overstated at first, but proved true enough, and it was definitely a most enjoyable cigar, as was the case the first time I smoked one a year or so ago.

So, lets get right into it.

Appearance:  Lovely, velvety dark brown, a little rougher veined than some, which, along with the shag foot and pigtail cap, gave it an old world, kind of rustic appeal.

Construction: Well built, medium solid pack, which is to say it has a bit more give than some of my regular go-to smokes, but no soft or "saggy spots or anything like that. It's built well.

Aroma: Sweet and chocolaty, evoking childhood memories of See's Candy in the mall, and the promise of free samples of normally forbidden treats. In a word, delicious.

Cut: No cut needed - just bit off the pigtail and all was great.

Light:  Very easy and even light, in large part due to the shag foot.

Draw:  The draw was perfect from the start, which is not nearly as common as it ought to be.

First Third: Immediately after lighting, I'm tasting the same kind of "undefined" sweetness as I noted in the cold draw, but that quickly morphed into a very sweet cream flavour, with just the slightest touches of coffee noticeable on the retrohale. Getting into the latter half of the first third, the sweetness has a more distinct chocolate flavour, and more of the coffee starting to come through toward end.

Second Third: Some of the ligero and espresso notes began to vie for centre stage, along with a touch of caramel (what!), and some  delightful, buttery nuance making an appearance. Into the second half, it's tasting more like a latte and the flavours are blending very nicely in the finish. It's still pretty mild, but I'm not complaining. The mouth feel is sweetly buttery, leaving a very light coating on the roof of the mouth.

Last Third: If they made sweet espresso cotton candy, and it translated well, it would taste like this! The strength is finally evident and the promised punch is delivering deliciously, with a dark espresso and burnt sugar finish. The cream has pretty much completely disappeared halfway through this last third, and there is definite pepper lingering on the tongue. There is quite a bit more of the ligero and espresso on the retrohale in the final stretch, and it keeps making me sneeze (weird), so maybe it's more spicy than seems, but again, no complaints.

Burn: Pretty even burn throughout, with only a couple touch ups, and those may have been cause of the fans running and forgetting to rotate.

Smoke: Lots of billows of creamy, white smoke, with a texture all its own. 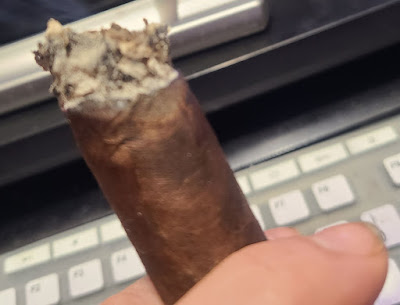 Ash: Very light grey - almost white, and flaky. This isn't the stick for your local herf's long ash contests. It only held about an inch at a time, and I ended up with ash down my front a few times. At least, being as loose and flaky as it was, it wasn't hot! And really, I don't care that much anymore about what anyone is going to think when I make an ash of myself. (OK, OK, I know. That was horrid. I can't help it!)  Not for smoking over your in-laws' expensive carpet, and if you are self conscious about ash on your shirt, maybe save these for at home smokes.

Bottom Line: The Red Eye may not start out of the gate a clear winner, but stick with it, and its definitely a smoke that risks burning the lips as you smoke it as far down as you dare. I give it a solid 8/10.

Posted by Khaos WolfKat at 8:00 AM

Khaos WolfKat
I'm into music more than anything else, whether it's making it, listening to it, thinking about it or talking about it. Music is the one thing in the world, without which, I think I would just shrivel up and cease to exist. I listen to about anything, but my passion is metal! Melodic death, black metal, power metal, Viking metal, thrash, speed, operatic/symphonic/epic metal...All things metal! I tend to be a bit of an introvert. This isn't to say that I don't like people.. On the contrary, I love people, as long as it's in moderation. I can be very social and a total "people person" for a reasonable period of time, but then I need to go isolate in my cave for a while and get my solitude fix. A lot of people don't like that about me and feel I'm antisocial. Those who are worth my time will accept that it is part of what makes me me. There are many things I identify as. These include, but are not limited to: Metalhead, Gorean, biker, hippie, warrior, spiritual, geek, poly, kinky, pansexual. Labels are a convenience. They do not define me. Consent, honesty, mindfulness and integrity are words to live by in my world.