skip to main | skip to sidebar

These were a limited run, Famous Smoke exclusive in 2010.
Here is the official description:

Final Blend cigars are the result of a marathon cigar sampling session held in Nicaragua, and as so often happens, the very last blend is what earned these uber-flavorful, medium-bodied cigars their name. The 'final blend' is...a core of Dominican, Colombian and Indonesian tobaccos rolled in dark, oily Brazilian Mata Fina Oscuro wrappers. Earthy, sweet, and spicy flavors weave in and out as notes of cocoa and coffee bean surface for a deliciously complex, MUST-TRY cigar.

At some point that year I ended up with one in one of their samplers, but it wasn't really on my radar at the time. Since then, it's been hanging around in my humidors, getting shifted from one to the other in my various re-organising as my collection has expanded, and I never got round to smoking it, as I never really read or heard much of anything about them and it wasn't high on my list to try.

Well, today, it just sorta jumped out at me, and I picked it up. Initially, I thought maybe my hygrometer was out of whack, because the thing was rock hard, and pretty lightweight, so I thought it was too dry, but all other sticks in that humi were as expected, and, on closer inspection, it didn't look dried out, cracked, or in any other way compromised. It was smooth, dark, with a nice sheen, lightly veined, and almost velvety to the touch and on the lips. Smelled wonderfully rich and just a little sweet, giving me hope that it would be a worthwhile smoke. 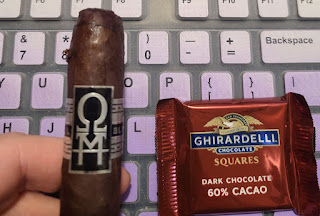 It was!! Alas, it may well be the only one I ever get to enjoy. About halfway through, I looked it up, knowing I wanted to find more of them, only to find the sad news of the aforementioned limited run.

As always, I employed the "light and cut" method, though, in this case, it was light and punch. It took a little while to light all the way to the centre, as the thing is really incredibly packed, but it was easy to light evenly, and the pre-smoke aroma was pleasantly earthy and dark.
The first couple puffs gave a hit of "crisp" (not sure how else to describe it), dry leather, moving quickly to a rich, deep, oily leather with thick, dense, chewy smoke that totally coated my mouth. Midway through second third, hints of espresso started creeping in, with slight chocolate in the aftertaste.
Strong espresso on the retrohale, and increasingly more creamy chocolate notes adding to leather and coffee toward end of second third.
Into the last third, it had morphed into a warm, mocha latte, with a slight, mellow, almost nutty nuance, though the leather notes were still peeking through on the back of the tongue.
Perfect draw throughout, very slightly uneven burn, but nothing a couple touch-ups couldn't fix, white/grey semi-solid, slightly flaky ash.

All in all a very nice, medium strength smoke, and I'll be on the lookout should they ever return! I give it a solid 8/10. 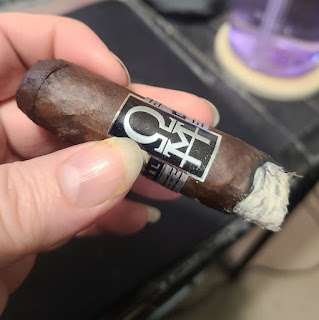 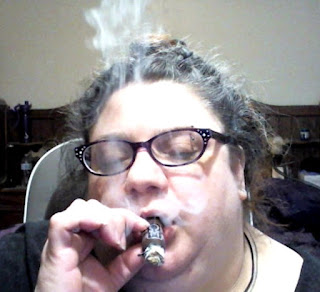 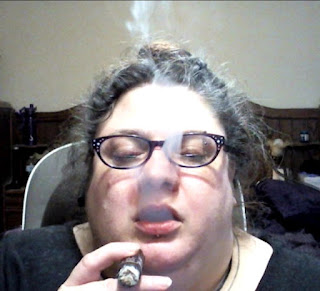 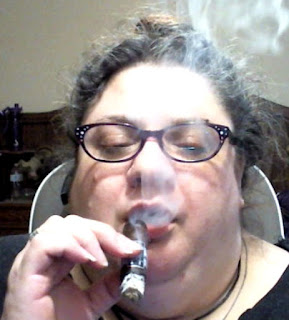 Posted by Khaos WolfKat at 6:19 PM

Khaos WolfKat
I'm into music more than anything else, whether it's making it, listening to it, thinking about it or talking about it. Music is the one thing in the world, without which, I think I would just shrivel up and cease to exist. I listen to about anything, but my passion is metal! Melodic death, black metal, power metal, Viking metal, thrash, speed, operatic/symphonic/epic metal...All things metal! I tend to be a bit of an introvert. This isn't to say that I don't like people.. On the contrary, I love people, as long as it's in moderation. I can be very social and a total "people person" for a reasonable period of time, but then I need to go isolate in my cave for a while and get my solitude fix. A lot of people don't like that about me and feel I'm antisocial. Those who are worth my time will accept that it is part of what makes me me. There are many things I identify as. These include, but are not limited to: Metalhead, Gorean, biker, hippie, warrior, spiritual, geek, poly, kinky, pansexual. Labels are a convenience. They do not define me. Consent, honesty, mindfulness and integrity are words to live by in my world.